Announcing the names of the 2017 Counterparty Foundation Community Directors

On April 3rd 2017, the Counterparty Foundation announced the start of its blockchain-based election for four Community Director seats, that will together with the Founding Director, Robby Dermody, officially represent the Counterparty project, help shape its direction and ensure an active and transparent leadership.

During the two-week voting period, a total of 68,134.4311 votes were given to six community director candidates via broadcasts.

Yesterday, at block #464556 we closed the voting and are now opening a two-day period for anyone to voice any concerns or objections. If by Friday, May 5th 2017 5PM ET, we don’t receive any objections to the preliminary results, the results will be made final and the below listed candidates officially named the next Counterparty Foundation community directors.

Here are the preliminary results: 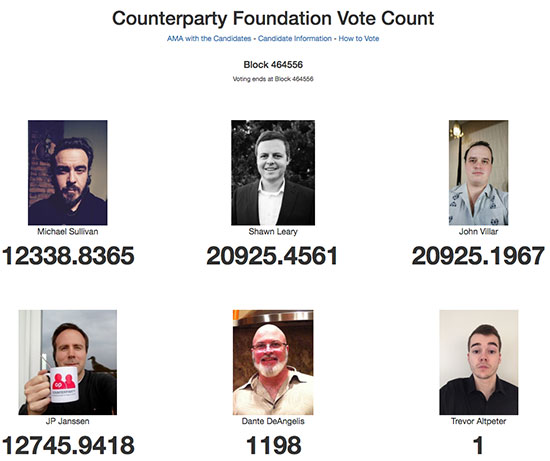 Based on the results, Michael Sullivan, Shawn Leary, John Villar and JP Jansen have been elected as the next Counterparty Foundation community directors for the term of one year. We thank everyone who participated in the election and showed their support for the candidates and the foundation.

We’re excited to have Michael, Shawn, John and JP aboard the foundation and are certain they’ll make great contributions that are in the best interest of the Counterparty project and its community.