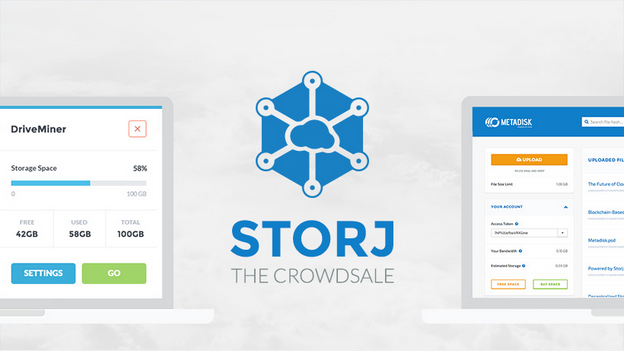 We are pleased to announce that Storj, a blockchain-based, decentralized data storage network, will be holding a crowdsale using Counterparty.

According to Shawn Wilkinson, the lead developer of Storj, “Counterparty and Counterwallet, upon much research, was found to be the most feature complete and stable platform. We are happy to be working with Counterparty to decentralize and grow the Storj platform.”

The currency token of the Storj network is SJCX. SJCX will have value because with it, users can pay and earn SJCX for bandwidth and storage on the Storj network. We will be working with the Storj team in the upcoming months as they add full merchant integration, so that SJCX can be accepted seamlessly through apps to purchase resources on the network.

With the addition of Storj, the Counterparty ecosystem gains an additional strong partner with impressive decentralized applications, such as DriveShare, which allows users to sell their extra hard drive space in exchange for SJCX. DriveShare is currently in development, and will only be available to crowdsale participants during the early network development.

Metadisk, which was released as a development alpha to the Storj community today, allows users to store files on the Storj network without downloading any software. Storj’s highly competent team and “code before talk” mentality matches the Counterparty culture very well, and we’re excited about this release.

Dropbox charges $1 per GB per year, while Apple iCloud charges $2. Go look at the extra free space on your computer, and add those numbers up. That should be proof enough we need to bring “the cloud” to the user.

Storj is going to change what people mean when they say ‘cloud storage’. Cloud storage, as we have come to know it, relies heavily on centralization. Our data is often received by and stored on centralized servers, in unencrypted format, which greatly reduces our privacy. Even when data is encrypted server-side there is concern about a “backdoor” through which data can be viewed in an unencrypted format by the service-provider. By contrast, all Storj files will be encrypted client side, so the nodes that host your data never see it in unencrypted format.

Like Bitcoin, SJCX will be deflationary so that as more resources are added to the network, you will be able to buy more storage space with each unit. Unlike Bitcoin, SJCX is linked to a digital commodity, space and bandwidth, which will always be used as long as the Internet exists. This gives SJCX a hard backing as opposed to just a market price.

Users receive 38,500 SJCX per Bitcoin they donate in the Phase 1 of the crowdsale, decreasing every phase. There will be 500,000,000 SJCX, with the following distribution:
70% of coins for Bitcoin purchases, 15% for Developer Pools and 15% for a Community Pool. The Storj team would like to raise 10,000 BTC. If the 10,000 BTC goal is not reached within 30 days, the unsold Bitcoin Purchase coins will be relegated to the Developer Pool, to be distributed later through hard drive mining or future crowdsales for new Storj platforms.